Last September 2020, the Habibi Center felt enthusiastic about filling in the registration forms so that new students could take Cambridge exams on the 5 December (4 students for A2 level and 3 for B1 level). Unfortunately, as a result of the strict lockdown imposed by Greek authorities since last 7 November, the dates of those exams have already been postponed 4 times (19 December, early February, 20 March, and now 29 May). 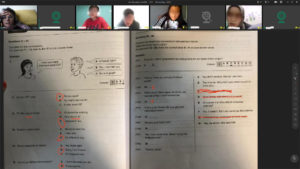 It is not an easy task to register our students to take those Cambridge exams as there are usually some changes from the day we pay until the exam’s date. One of the main issues is that students don’t show as much commitment as the Habibi Center’s team expects. That lack of commitment might be due to several factors usually seen in the refugee youth, such as low self-confidence and fear to face a new failure in life, as well as lack of focus as a result of their unstable legal situation full of uncertainty, sudden interviews with their lawyers and constant issues with their asylum documents. In addition to that regularly occurring scenario, we are quite concerned about the detrimental consequences of the strict lockdowns imposed by Greek authorities since the start of the Covid-19 Pandemic in March 2020. The suspension of most of the educational programmes that refugee youth were able to attend, owing to these extreme movement restrictions, have triggered an important increase of depressive cases. As a result, the fragile sense of structure and routine provided for a long time by all those educational programmes, including the Habibi Center, has been dramatically disrupted. For example, only focusing on the 8 students registered last September to take one of the Cambridge exams, 3 of them have had to stop attending the Habibi Center and been withdrawn from the exams due to those common negative factors, which have been radically worsened by the Covid-19 restrictive measures.

Right now, our primary wish is that free movement is restored as soon as possible and everybody is able to continue living their lives as before. Although all these current restrictions are affecting most of us considerably, they do affect refugee youth to a greater degree. Another clear example is in regard to these Cambridge exams as many Greek teenagers will be able to take them in the near future when the current situation improves, but some of our students will not. As a result of the measures suffered since March 2020, their only chance already passed and they are no longer part of the Habibi Center due to 2 main reasons: relocations to other countries or their feared adulthood, which pushes most of them to stop studying in order to find a job and sustain their independent lives. Despite all these added challenges, we, teachers and students, continue pushing as much as we can.

We would like to thank our friends in the U.K. who donated some money last year to register some students, as well as some others who have recently helped us with the registration of 6 other students who started preparing for the A2 exam and 1 for the B2 exam last January 2021. Your money will, hopefully, pay off in the end of May. Finally, we would also like to express our immense gratitude to the British Council Athens (organisation through which we have been registering our students since the end of 2017) for considering our special needs, understanding the unstable legal situation of our students, and kindly allowing our requested changes.

It’s been a few months since last time we posted some updates about life in Athens, once again not because the activity of the centre has decreased but all the contrary.

The summer was packed with the usual English lessons in the afternoons as well as different interesting short-term workshops in the mornings.

First, thanks to the donation of several laptops from the USA and the collaboration of Rick, a volunteer from the same country, we were able to plan a 2-week workshop about the basic use of a laptop and the introduction to MS Word, Google tools, and typing. 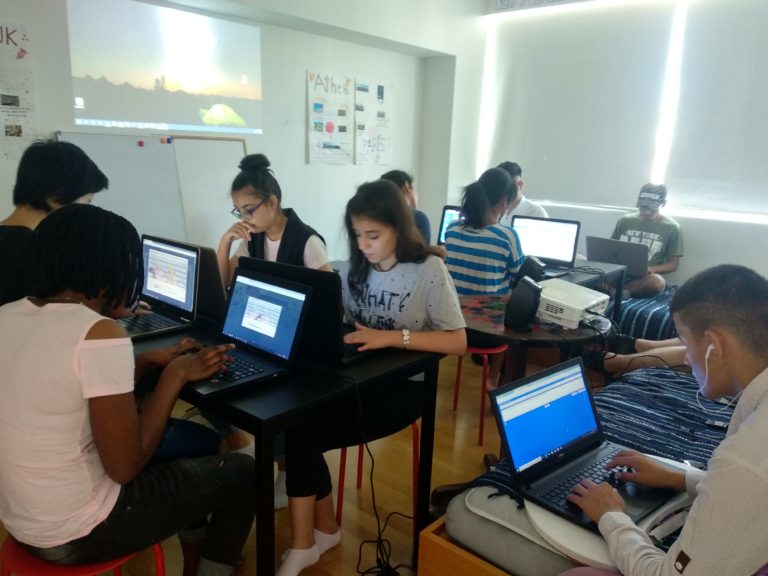 Without any time to breathe, Anne, a volunteer from Finland who has already collaborated with Habibi Center in other occasions, came to carry out a new art project. This time, the students created 2 self-portraits with the collage technique. One of them represented their inside, showing their fears, goals, skills, life experiences, and personal views of their daily life in Greece. The second one showed their external appearance. Alongside the 2 self-portraits, they expressed with words some of their personal information as well as the reasons why they composed the inside portrait in that way. After 2 weeks of intense work, we exhibited the work in a café, so that everybody could have a better idea of the thoughts of this youth. 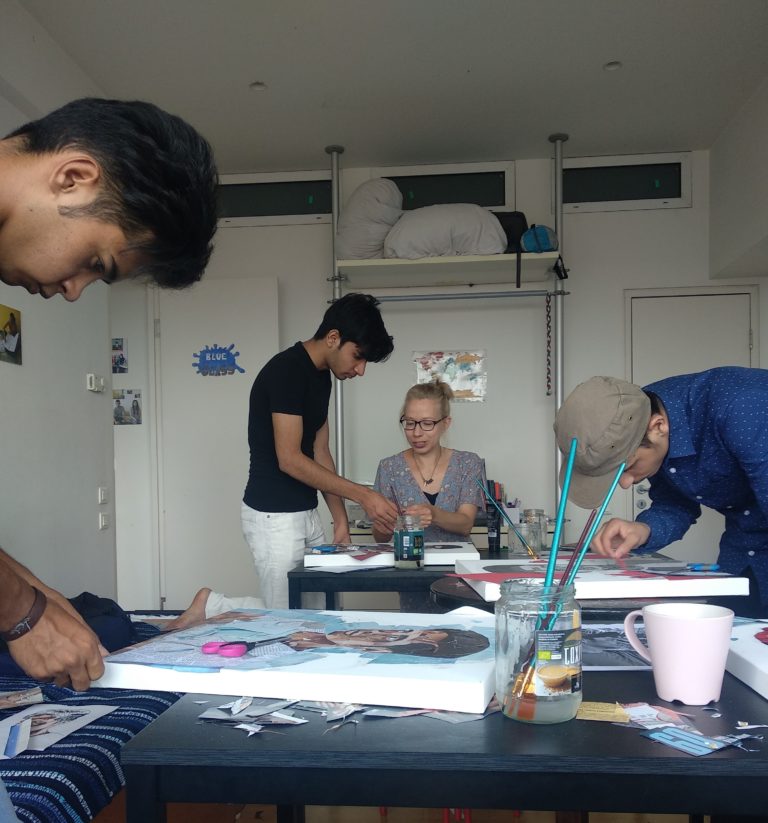 Right after the successful art project, Rick turned the laptops on one more time to help carry out his second workshop with a new group of students. In addition, Stephanie helped others create their own CVs.

Next, it was Anahí’s turn, a photographer and volunteer from Spain who helped carry out a pinhole camera workshop. Several students made their own camera with a shoebox and played with them for 1 week as well as learning about the classic developing process. Although there wasn’t enough time to do as much as was planned, the students were able to experiment and enjoy this distinctive technique. 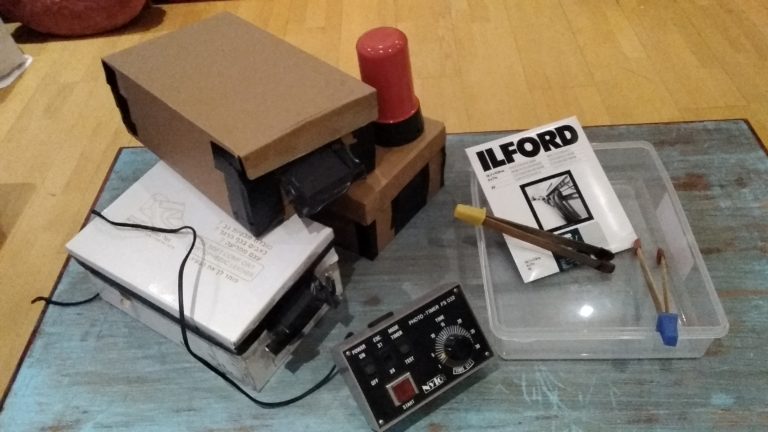 Finally, Javier, a Spanish friend who has supported Habibi Center since its beginnings, brought his experience to Athens and carried out a science workshop for 1 week. Two groups of students enjoyed learning about different aspects of science, such as the Universe, the Biosphere, the Hydrosphere, life and cells, the properties of the light, and the basics of electricity.

After a long summer, the regular course of Greek schools started again and all the students eventually came back to routine. At the same time, teachers in Habibi Center had again the difficult task of trying to accommodate to each student’s schedule as much as possible. Now that the groups have been finally set, around 40 students are able to continue attending regular lessons in the centre. Moreover, 2 of those groups have already started preparing for the following Cambridge exams, KET and PET, expected for next December 2019.

Once again, all these achievements are not only thanks to the volunteers who share their time here in Athens but equally important thanks to the help of many people spread all over the world, either with material and financial donations or simply spreading the word about us.

Imprisoned identity, harassed dignity, vulnerable soul, it is time to wake up and fly free. It is time to shine bright. You now possess the right tools and know how to do it.

Some Wild things can be seen at the school. Luckily, they aren’t planning a wild rumpus anytime soon. They are special and positive creatures for all those who want a better World, unlike many powerful characters determined to keep creating numb sheep, unable to think and live independently and freely. Instead, these ones are determined to stand up for themselves, willing to face their future with optimism and joy. Wild things who want to have a voice in this endangered planet. Wild things who don’t want anybody to look at them as a victim anymore, but as a respectable human being.

To share a common and safe space where EVERYBODY has the freedom to express what they truly believe, where EVERY opinion and EVERY person is respected, where a funny comment or a silly mistake can be followed by healthy laughs, and where EVERYBODY feels empathy for each other – This is just what they need. It’s just what Habibi Center provided them.

It is difficult for the teachers to express what they feel with all that magic evolution. Imagine how anybody would feel if a scared girl started her ‘A, B, C classes’ five months ago and now she is able to recite profound poems about herself. Imagine how anybody would feel when a fifteen-year-old vulnerable boy started his classes seven months ago learning ‘to be’ and ‘to have’ and now he is going to start a new stage in his life in another adopted country as a well-rounded human being, able to make decisions by himself.

These Wild things were tired of feeling like a living death. They felt useless and underestimated by the society and themselves. NOT anymore. We are extemely proud of our beloved Wild things.

Thank you very much for continuing to support Habibi Center. We need more Wild things. We need less victims.

Habibi Center is close to its 2nd anniversary. During all this time, it has worked as an independent educational project. When it started, it needed total freedom of action as the situation with the youth was critical and chaotic. It couldn’t wait for any OK from third parts and leave this collective without education and integration for a single second more.

All that uncertainty has made the members of the project think over the idea of setting up Habibi Center as an official and legally registered association.

Nothing major is going to change with this decision. Habibi Center’s priority is not to massively but staying as a cozy and close family for a long time and continue taking actions as independently as possible. As informed above, the main reason is to give more stability and be able to carry out better and more appropriate decisions in the future. The entire family deserves it.

Further information about this decision will be shortly announced.

THANK YOU VERY MUCH for keeping supporting these lovely students

Our students want to THANK everyone who supports Habibi Center in a special way.

We present to you ON THE SHORE, a book written by Fernando Del Berro:

“What is the line after which a refugee who flees from war feels safe for first time? 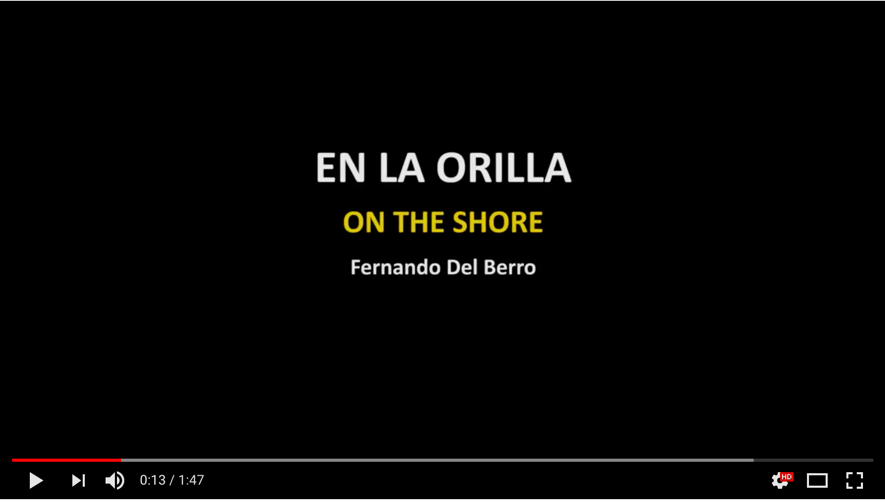 Here is my book ON THE SHORE: photos and an extensive report with testimonies and texts collected in the Greek island of Lesvos.

100% of the profit from the sale will go to the rescue NGO Proactiva Open Arms, which is one of the few organizations that continue saving lives every day in the Mediterranean.

Language: English (the book showed in video is Spanish version, but an English version is available)

It’s been a few months since the last update. The reason is not because Habibi Center is vanishing. On the contrary, the teachers in the centre keep working as hard as usual preparing new lessons and different activities so that our hard-working students can enjoy their learning.

As always, the team is so pleased to see that students who have grown alongside Habibi Center from the very beginning are already in their next stage of this process of gaining a safer and prosperous present and future in Europe. All the best Sally, Genar, Sana, Janan, Raeda, Layla M. Mona, Ahlam M., Maher A., Saher, Nizar, Nazdar, Mazin M., Nawzad, Raid, Rana, Hannah Y., Berzo, Nahla, Layla, Shirin, Mayada, Esma, Maher M., and all their families in your new countries. We miss you so much!

The Habibi Center hasn’t stopped there, though! Although some of the students named above set the bar high, the current ones are pushing even harder. We’d also like to use these lines to congratulate Jasmine, Nargis, Maher M., Xiao Song, Mahmood B., Nashaat, Layla M., Ahlam M. and Raid who took KET and PET exams last November. You guys worked hard and your effort was rewarded with very good scores and certifications. One A1, six A2, and two B1 CEFR level in English language were achieved.

We also send tones of positive energy as 6 students have some tough weeks ahead before attending the PET and KET exams in March. The immeasurable effort of this youth is the reason why Habibi Center keeps being a reality.

Once again, a big THANK you to all Habibi Family for your massive support. 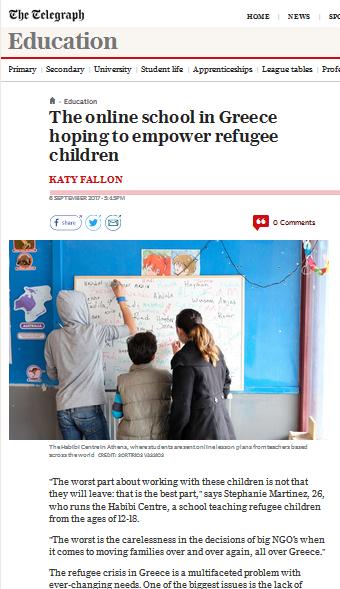